“The other day. I saw a bear. A great big bear. Oh way up there!” Ok, so if you didn’t go to Camp Bird during the summers of your youth, you may not be familiar with the song. But the message is the same. The other day (Friday to be exact) I saw a bear. He maybe wasn’t a great big bear, but he was big enough. I wasn’t terribly surprised to see him because he’d made a visit to the turkey coop only a handful of hours prior and left with two of our turkeys. Asshole bear.

Friday morning I went to let the birds out and saw this on the turkey coop door:

We had a fisher cat in the yard only a few days before, so I figured he must have been around, trying to get in for a meal. I opened the door and the waterer, which is pretty big, was tipped over. I had just cleaned the coop so I was irritated, but I figured the birds must have gotten into a squabble and knocked it over. I picked it up, headed back out the door and saw this: 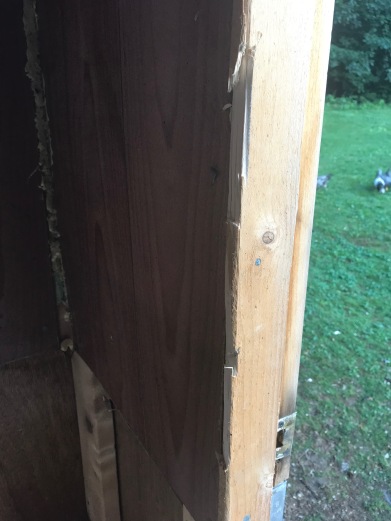 There were large chunks hanging from it (I pulled them off before thinking better of it) and at that point, I knew something really wasn’t right. The broadbreasted turkeys have some mean claws, but nothing that would have done that type of damage to the wooden frame. Finally, I noticed this: 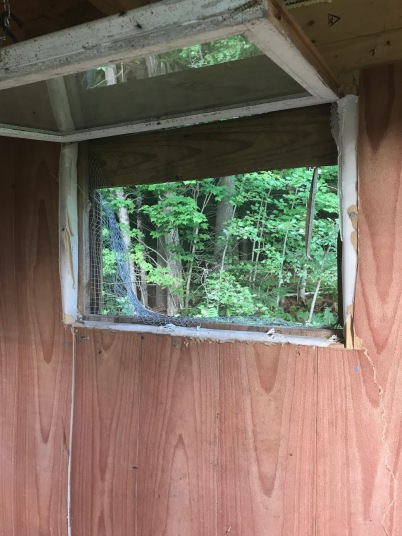 Originally fastened securely, the hardware cloth was torn from the building and crumpled quite impressively. 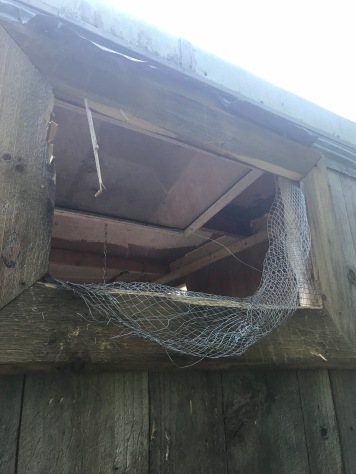 Wooden chunks on the floor of the coop and the window from the outside.

This was our first real attack on the birds, and even though you know it’ll happen eventually – we do live in bear country – you’re still not quite prepared for it. Especially when you realize the bear got away with some of these:

And left you with:

As mentioned, he came back later in the afternoon to see what else he could find. The keets were squawking up a storm so Javi Bad Dog and I went out to check on things. The bear popped out of the woods behind the coop, pleased as he could be. I went running down the yard (in my socks, once again), yelling and clapping like a crazy lady. Luckily the bear was feeling accommodating and went back into the woods. Javi Bad Dog was completely oblivious to the bear until after it was gone.

We looked around and it seems like he tested a first window before moving to the window facing the woods, where he would have had more privacy to work:

We now have an electric fence around the coops, and hopefully that will deter the bear when he comes back.

It’s a bad year for bears – the blueberries took a hit with the heat, the drought at the beginning of the summer, and now a lot of rain. The apple trees are also thin, and I was told the acorns are also bad this year. So I can’t blame him for going after an easy meal of turkeys and meatball chickens. Of course, that doesn’t mean we’ll be skipping our bear tag this year.