We have a sort of tradition in my family. We like to send disgusting pictures, stories, and articles to each. This can be pictures of a surgical procedure one of us had, something one of our kids did, but it’s often inspired by something we’ve found in our gardens. The top picture was sent by my sister. In case you aren’t sure what’s going on in the picture, it’s slugs having sex. They’re attached to a string of slime, which is attached to the side of her house. (You’re welcome.) The bottom two pictures were sent by my cousin after a discussion on wasp nests. I found them horrifically fascinating, and I really considered stringing up one of the baby dolls in an apple tree to see if the wasps would go for it. 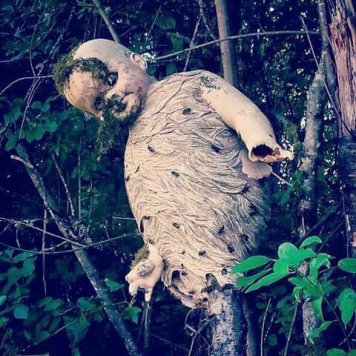 Today it was my turn to share. I actually have to give credit to my sister-in-law, because she’s the one who pointed these guys out. She was looking at our garden yesterday evening and asked me if I had seen the green worms on my potato plants. I had noticed the plants were looking chewed on, but didn’t examine them too close because I was planning on pulling them this weekend. When I went out with her to look, this is what we found:

They’re easily recognizable because of the markings on their bodies, as well as the horn on their asses. They would be almost charming if the ass-end was the head. Like fat, green little unicorn ponies.

Although they’re called tomato hornworms, these suckers were on my potato plants, and they actually stick to plants in the nightshade family, including eggplants and pepper plants.

They’ll completely decimate your plants, as you can see in this picture:

One of the ways you can tell if you have them (other than your plants suddenly looking like complete shit) is little berry-looking worm poop. Think the berries in Captain Crunch Wild Berries: 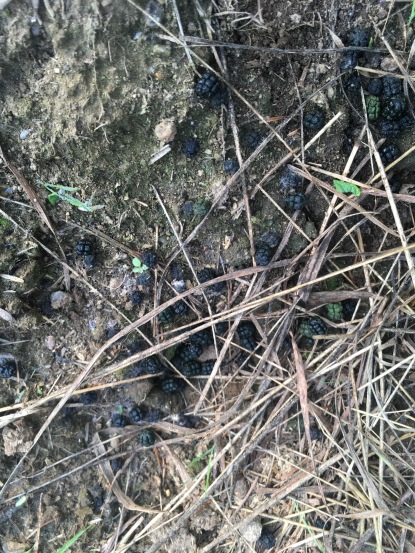 If you see berry poop, look over your plants and you’ll probably find these guys: 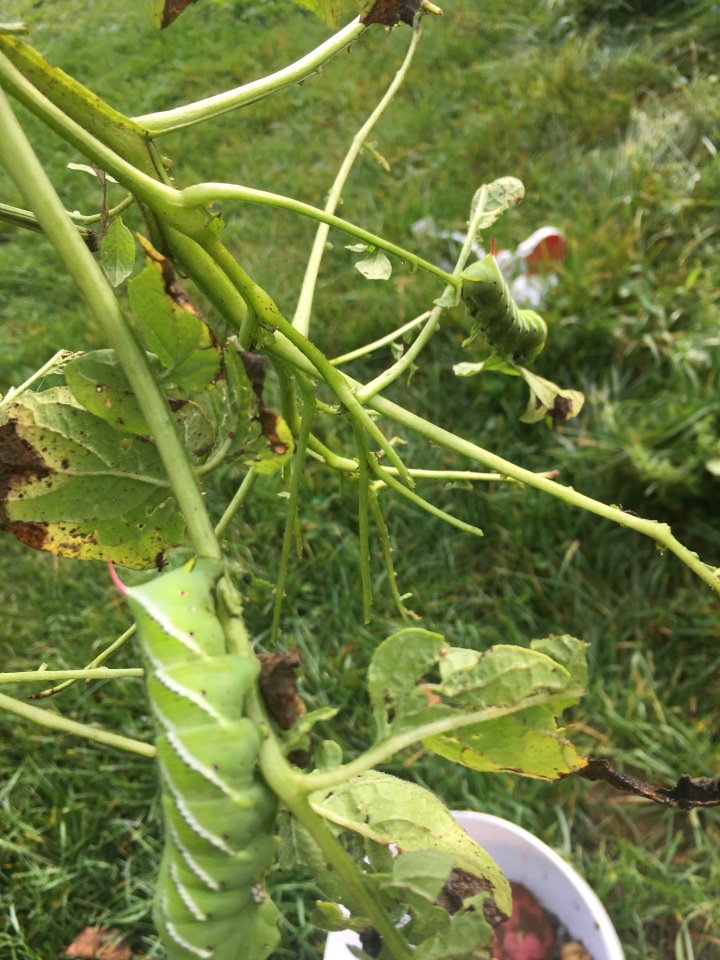 They do the most damage in the caterpillar stage. This time of year, the big caterpillars will start dropping off of the plants to begin burrowing into the ground for the winter. Like this guy:

They stay in the ground over the winter and emerge as big moths in the spring. The moths are often referred to as “sphinx”, “hawk”, or “hummingbird” moths. The moths eventually lay eggs on leaves, and the whole nasty process begins again. So the question is, how do you get rid of the little bastards?

Till heavily in the spring. This kills about 90% of the caterpillars still in the ground. You can also plant things like dill, basil, and marigolds around your plants to keep the caterpillars away. Wasps are also your friend when it comes to hornworms. The braconid wasps actually lay eggs on the caterpillars, and the babies eat the caterpillars from the inside out. So if you find one of these guys and he looks like he has rice stuck all over him, leave it alone! The wasps are working.

If you do find them on your plants, they’re pretty easy to pull off (but don’t squeeze too hard!). Chickens supposedly eat them, but ours weren’t impressed. One of the girls pecked at one a couple of times and then left it alone. If your chickens are picky, or you don’t have chickens (why don’t you have chickens!?), you can put them in a bowl of soapy water. Like so:

They get pretty pissy when you first put them in but die fairly quickly. I ended up with a fairly healthy worm-crop – eleven. This doesn’t count the three we pulled last night. The most I had on one plant was four. I will warn you that if you accidentally dump your bowl of worm-water over, you may get this: 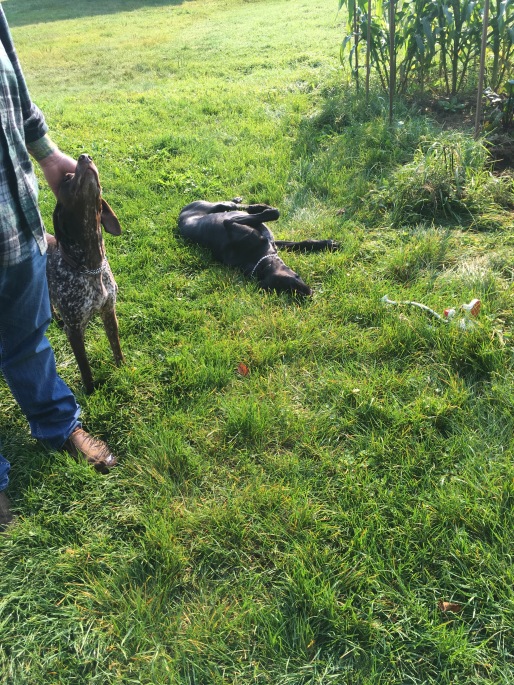 After I had already taken mine swimming, my cousin mentioned that lizards and tarantulas are HUGE fans of hornworms because there’s no exoskeleton. They’re also full of nutrients. We just happen to have a nice, big bearded-dragon in our house, so I madly looked over all of the potato plants. On the very last one, I came across this guy! 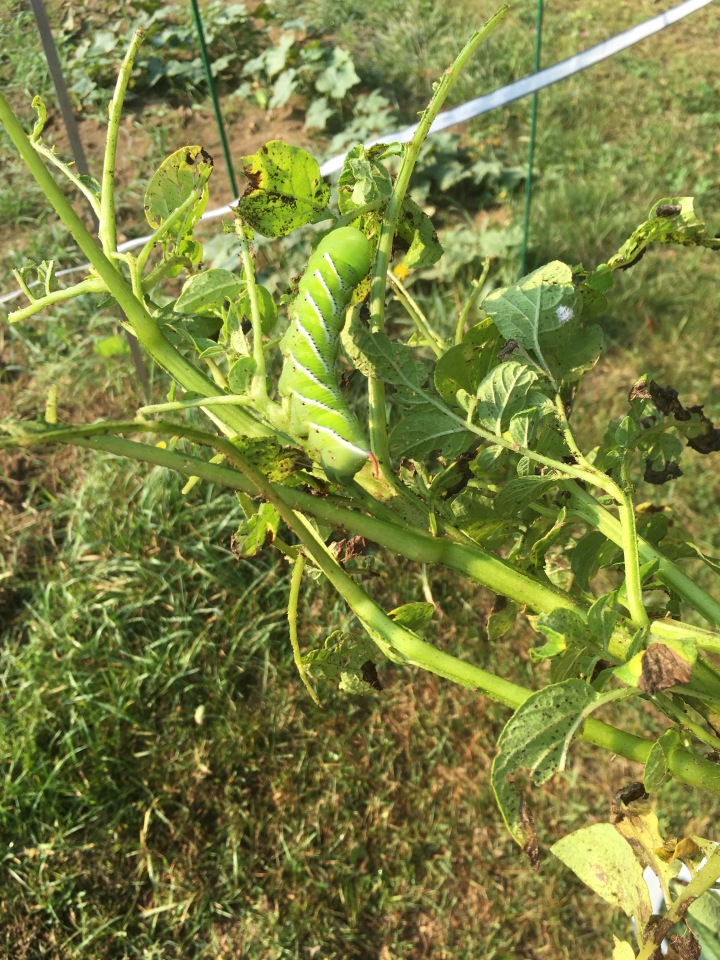 If you’re feeling really adventurous, or if your tomatoes took a beating from the worms, get some payback! Eat those bitches! Fried Green Tomato Hornworms – the recipe can be found at: https://www.thedailymeal.com/recipes/fried-green-tomato-hornworms-recipe 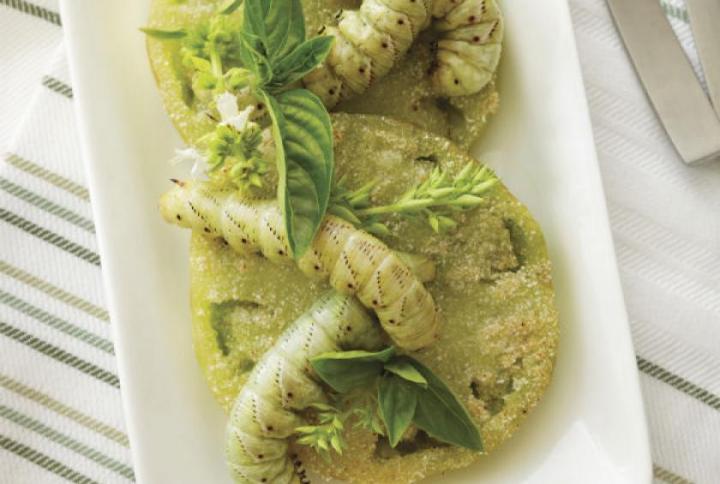 (Many thanks to my sister and cousin Mandy for your thoughts and suggestions. Credit also to http://www.extension.umn.edu/garden/insects/find/tomato-hornworms-in-home-gardens/ for additional information.)