Poison Ivy! Yes folks, that’s right! Because the couple that scratches together stays together! 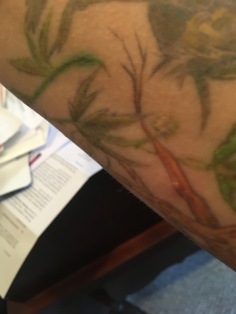 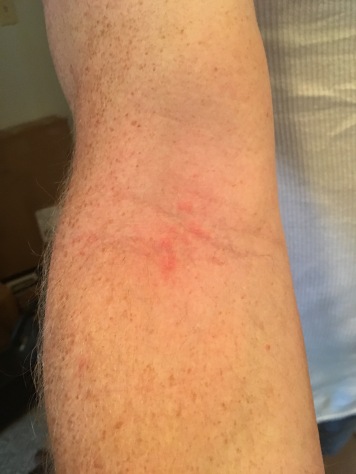 Mother. Fucker. That’s really all I can say about it. I hate poison ivy. He hates poison ivy. On the positive side, the area that we cleared out by the shed looks very pretty.

Tuesday was a big day for us. Actually, let me back up a bit. When we decided that we were going to move to New Hampshire and, among other things, try our hand at farming, Brother John started trolling Craigslist for us. One of the ads he sent our way was for a cabinet incubator (holds something like 300 chicken eggs), an electric scalder, and a brooder. I was actually only interested in the scalder (we’re talking turkey-sized, people!), but it was a package deal at a ridiculously low price. Brother John and his brother the Champion Snorer went and checked them out for us, declared it an excellent deal AND talked the guy into selling some beehives.

So now we had this incubator. Our options were to use it as a funky end-table or attempt some hatching. Since we need chickens we decided to go with the hatching option and put our first dozen in at the end of June.

Since the incubator had been sitting in a barn for awhile we weren’t sure of our hatching rate so we set two more batches. And then we were given a dozen Barred Rock eggs and a dozen Ameraucana eggs (thank you Lee & Cindy!). 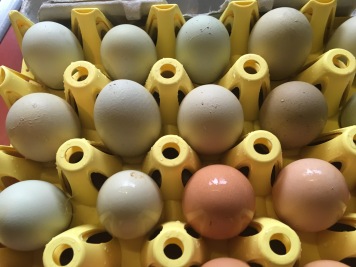 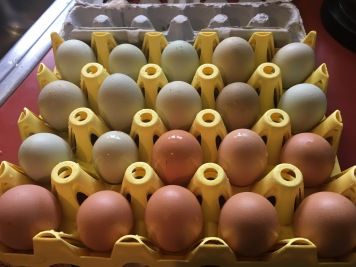 So we set those, which brought us to 52 eggs. And then I may have set another dozen….

Anyway…Back to Tuesday. Tuesday was Batch #1’s hatch day. This egg happened to be in the front so the first one I noticed, but I think it was actually the third to hatch.

Below is actually the first chick to pop out. And it was a naughty chick. I intended to keep new chicks in the incubator for 12 to 24 hours. This chick insisted in hopping out of the tray to the back of the incubator and then screaming bloody murder. After the second rescue I pulled it out and put it in the bin. 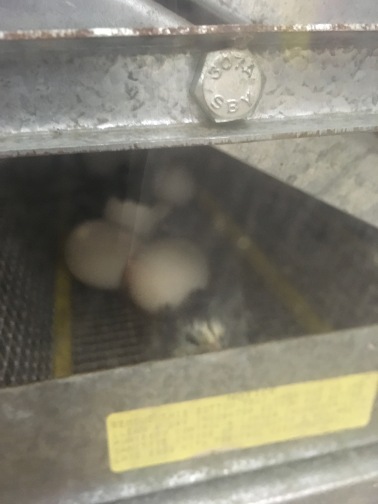 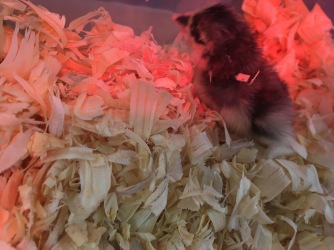 We ended up with eight out of the first dozen. Which is higher than what we predicted our hatch rate to be.

The above is the egg from the first picture. We have video of the hatch on our Facebook page… 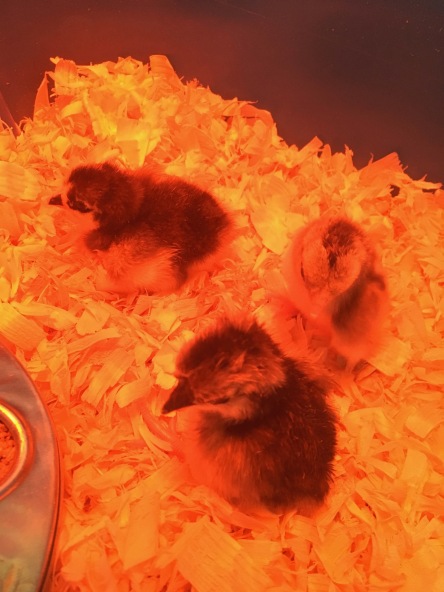 We think we have four Old English chicks, three Sumatra chicks, and one Sumatra/Bantam Cochin cross (that should be an interesting chicken). Tomorrow is the next hatch day so make sure to check back for news on The Peepers…The New Batch!!

We went to Plymouth today to buy shavings for the birds, a spray bottle (completely forgot to pick one up) and pieces to fix the sink. We were just tooling around on the back roads and came across a very nice turtle in the middle of our lane. Having heard my stories of rescuing snakes and turtles off the road, Tracy didn’t even blink when I yelled “turtle!” and he just pulled off the road. There was another car that turned around, too but I already was out of the truck with turtle in hand by the time they stopped. 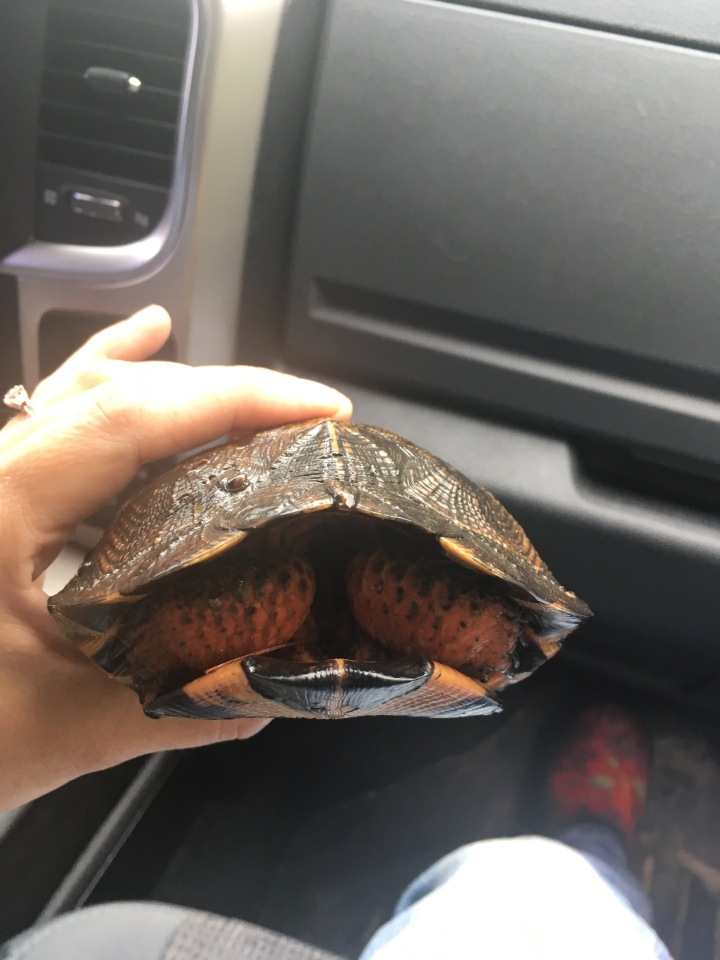 He was quite shy to begin with but was soon trying to walk around the truck.

We decided to take him home since we have the pond, streams, woods, and fields on the property so we felt pretty sure whatever type of turtle he happened to be, he’d be happy. And far away from the road.

He sat this way, contemplating the pond, his life, or possibly sex with an ostrich, for over an hour. We finally just left him to his thoughts and when we went back about a half hour later he was gone.

After looking him up, it turns out that he’s a wood turtle. They like slow moving streams, fields, wooded areas, and sandy ground. We don’t really have sand but everything else is covered so hopefully he’s happy. And stays away from ostriches.

At the beginning of July we got a lot of rain. Like A LOT of rain. The Baker River is across the road from us and is usually a nice walking river. Meaning you can wear an old pair of shoes and shorts and have a fairly leisurely stroll through it without fighting rapids and fearing for your life. Well the rain that we got on the 1st of July brought our nice calm river up at least 5 feet. I shit you not. We witnessed entire full-grown trees being taken down by the water. Very impressive. 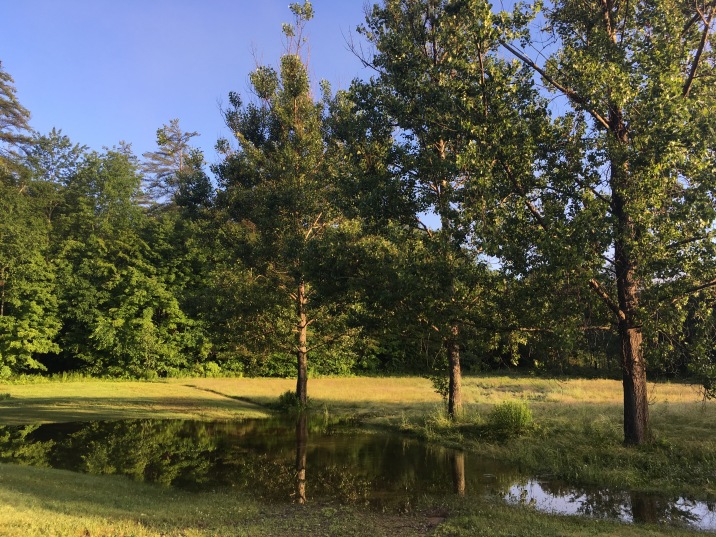 The point is we’ve had a lot of rain this summer. Being a recent transplant I can’t say for certain that this is an abnormal amount of rain for a NH summer, but it’s a lot of rain. Which does not explain why our blueberries are being bitchy.

Remember the blueberries that I posted about? (It was only a few days ago so it shouldn’t be that difficult.) To give you an idea of what I was up against… 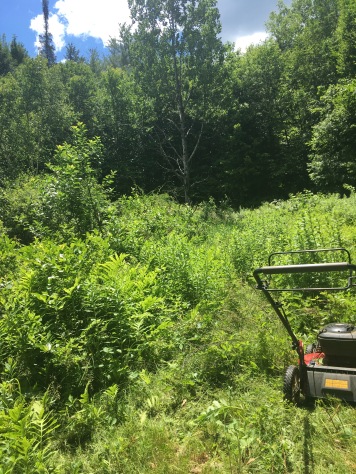 The first picture was before I even went over the bridge to get behind the pond. The second picture is what it looked like before I attacked it.

Here it is cleaned up. 15+ blueberries – easily identifiable from all of the other craziness growing up there. Yes, they need to be pruned and cleaned up but at least we can now get to the bushes. And we can see a bear before being mauled by it. 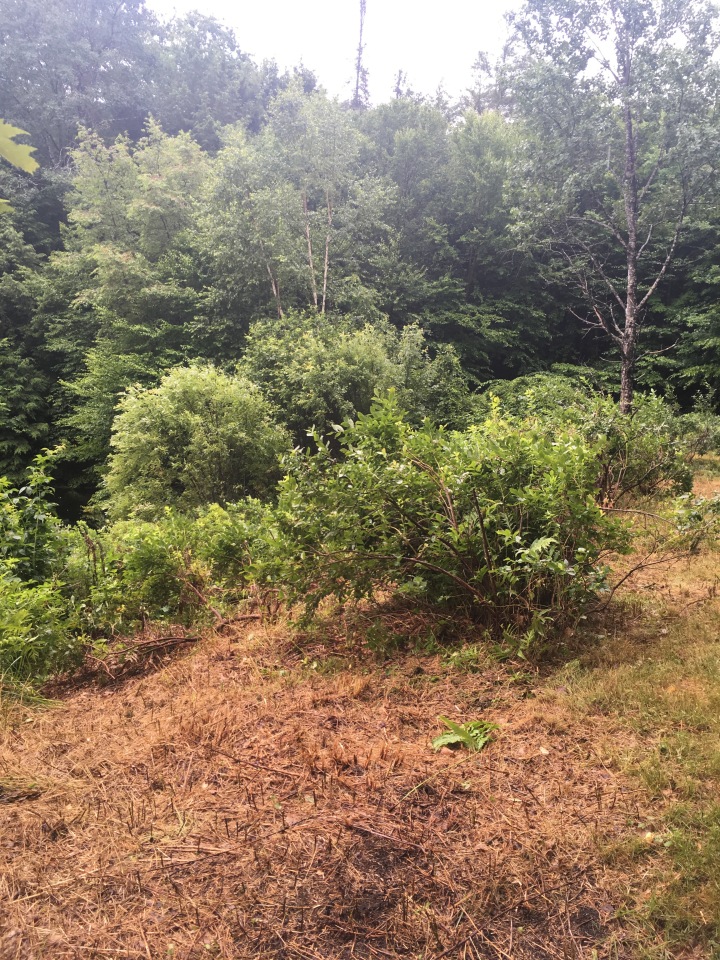 As beat up as the bushes are, each one had tons of non-ripe blueberries on it. We walked up last evening to check their progress and color me surprised when I found this… 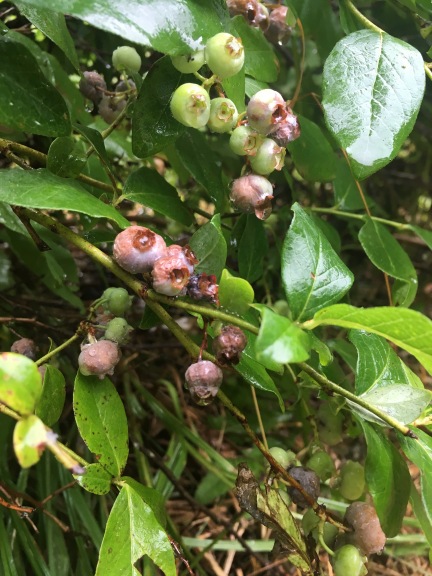 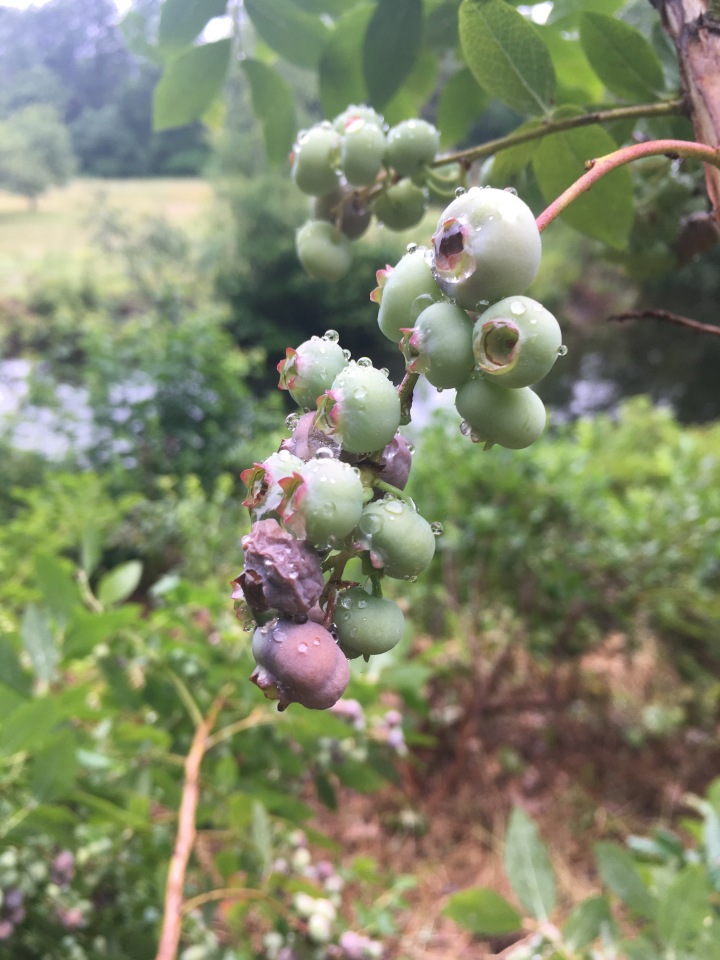 Withered up little bastards! And from what I read, they’re withered up because they’re dry! WTF! With all the rain we’ve had, you’d think these guys would be swamped. Mostly we’re glad that it doesn’t seem to be mummy berry (as fun as the name is it doesn’t sound fun to deal with), and I’m also glad it rained most of the night and today. Because I really don’t want to explain this one to the bears. 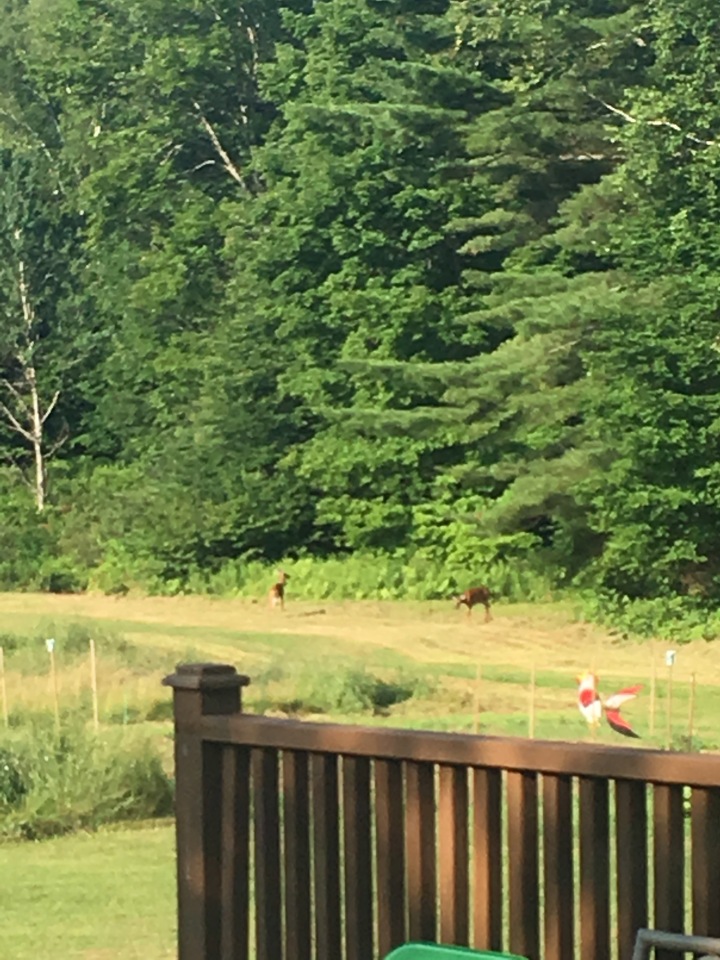 We’ve been living in the house for roughly six weeks now and considering how much of our property is made up of woods, it’s a little surprising that we haven’t had more four-legged visitors. Hoppers might disagree with us because the other night he was kept quite busy thumping out warnings to whatever it was that was pissing him off. Anyway, we were just talking this morning about how little wildlife (not counting little birds) we’ve seen. The turkeys haven’t been around for about a week and no deer since before that.

Well earlier today Javi Bad Dog started barking in the other room. I was in the office on the computer and as I often do I just told him to stop with the barking. I then happened to look out the window to see a deer walking by the garden (the little f*ker – like the cucumbers need any help dying). I went to the Florida room where Javi Bad Dog was staring intently out the window at not one, but two deer. I think we may be putting the fence up this weekend. (Sorry about the quality of the picture – my phone only zooms in so far.)

While the deer are a pain in the ass but not particularly exciting, I received this picture about an hour later (thanks Ray and Lauren!). This was actually taken a year ago but the fine marshmallow bear was in our front yard at the time. We have seen evidence of bears out by the blueberries as well so I’m sure we’ll see one or two eventually. 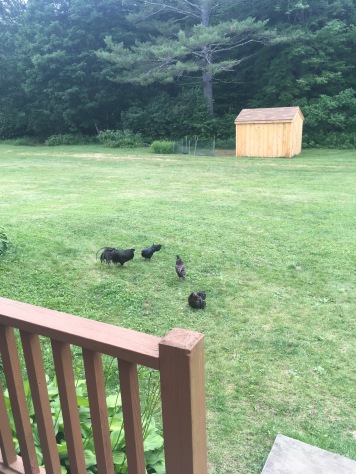 For now, we’ll be content with these questionable characters who have taken to begging at our door.

A brief history lesson: Back in the early 1780s several residents of Warren New Hampshire learned that their property was actually located in Wentworth New Hampshire. One such person was Simeon Smith. He was the local historian and patriot, and by many accounts a pretty good guy. But, there was also gossip about good old Simeon. Some people believed that Simeon was a wizard and a necromancer. According to George Plummer’s History of Wentworth (1930) Simeon would occasionally turn his neighbors into horses and ride them all over the country side. He could become as small as a gnat or larger than a giant and was sometimes seen at twilight, stalking through the forest…

Simeon sounds like our kind of guy and as luck would have it, (from what we can tell from maps), his property was just kiddie-corner to our property. So it made perfect sense to name our new Blue Sumatra rooster Simeon Smith.

He’s already lived up to his name. Just before the 4th of July we had a witch egg in the nesting box:

For those who aren’t familiar with the term, witch eggs (or cock or fairy eggs) were believed to have magical powers and would bring bad luck if brought into the house (oops). If one was incubated by a witch, toad, or serpent, a cockatrice or a basilisk (a winged monster with a serpent’s body and a rooster’s head) would hatch out.

So far our witch egg is sitting docile on the kitchen counter. However, since necromancers are tricky bastards, we’re keeping it far away from the incubator.

I’m behind on writing. Actually it’s worse than being behind, I never started. But I’ve been taking pictures so at least that’s something.

Things have been busy and as I play catch up on the website I’ll be posting pictures to share what we’ve been doing. I was at the pond on this particular day (maybe July 6th), ripping out some type of berry cane (and various other things) for five hours. I did manage to free the 15+ blueberry bushes, which was the whole point of the thing. My arms looked a bit like I’d stuffed myself through a shredder but if we can beat the bears and birds to the blueberries I think it’ll have been worth it.