Most people around here have chickens. Depending on who you talk to the chickens might be farm chickens, backyard chickens, or pet chickens. The people I’ve talked to enjoy having their chickens because, let’s face it, chickens are fun. And most people tell me that having chickens is fairly low stress. Until something came in and ate all of their chickens. And then, distraught, pissed off, or just frustrated by the whole process, many people end their chicken adventure.

We knew that we would have chickens on our farm because of the insane tick population and because we wanted eggs. We also knew that free ranging our birds meant we had the potential of losing a quarter to a third of our flock from predators, sickness, stupidity (the chickens, not us), stupidity (us, not the chickens), and death sentences. As we’ve progressed through winter, we found that our estimate was pretty accurate.

About a month ago I looked outside and found the guineas out in the trees. This isn’t something to be alarmed about because the guineas like to perch high when the mood strikes them. 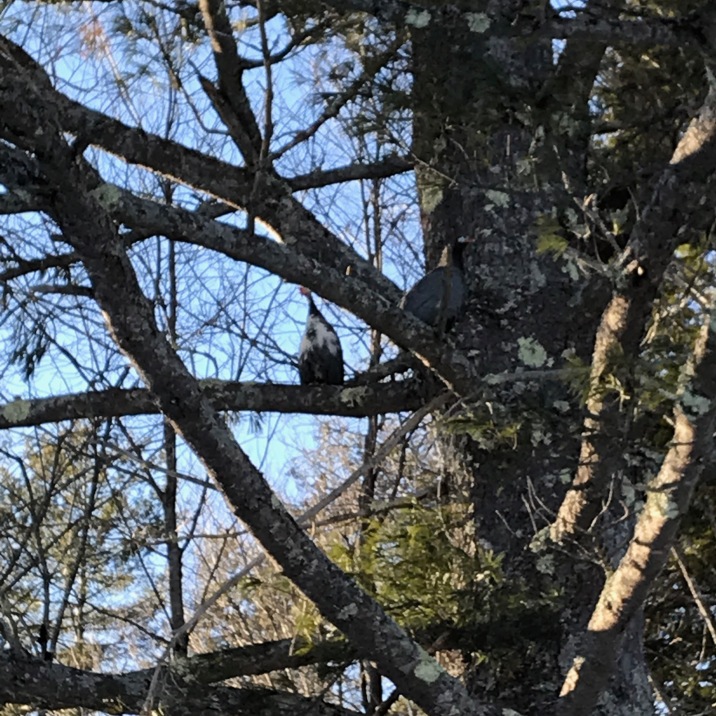 I thought, “what are those foolish birds doing up in the tree?” and grabbed my phone and took pictures and video. As I was taking pictures I started paying more attention to the area around the coop and came across this: 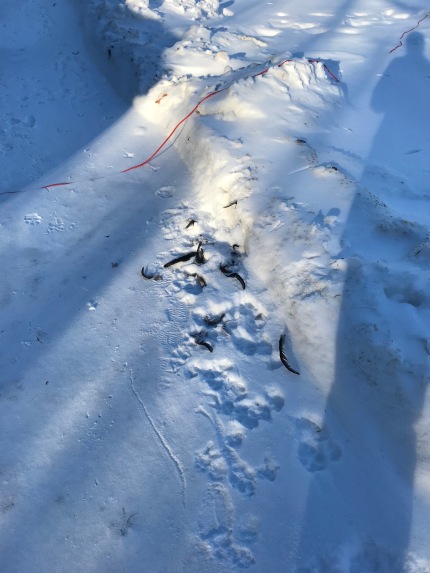 What you’re seeing are marks in the snow from the wings of birds freaking out. One or two might be a couple of roosters fighting. But when you have them all over it means a predator came in. In this instance, we know we had two somethings come in because of the tracks. Probably coyotes, one smaller and one bigger. We quickly counted chickens and found out we had a significant number missing. Tracy found one of the largest Ameraucana roosters in the woods still alive but with a huge tear in his back (he died that night). He found our large Barred Rock rooster dead in the woods. Tracy said the smaller animal must have had this rooster because he could see where it had to drag the rooster through the snow and kept dropping it. The rooster finally got lodged between trees and the smaller animal left it. My little Bantam Cochin hen, Tilly, was also gone and we suspect she was taken easily because of how little she was. Tilly was the worst for me because she was our only pet chicken.

We also found several chickens scattered around the property. A group was hiding out in the front of the house and another hen was way out in the yard, tucked up in one of the huge pines.

I had the chickens out for monitored play time around the middle of January and one minute everyone was hanging out and the next there was a large coyote coming down the hill, almost to the coop. The chickens were all calm as could be, standing around without a care in the world. I ran outside, yelling and cursing at it to get the fuck away from the chickens (who were staring at me like I was crazy). It finally turned around and went back up the hill but it took its time and then stayed up on the ridge watching.

A few weeks after that I was looking out at the back and noticed something moving in the orchard.

He nicely stayed in the orchard and then turned back and went into the woods behind the pond.

Our latest predator encounter was with a very lovely Fisher Cat. Tracy caught him on the game camera taking a dead rooster (check out our Face Book page for the video).

Which brings up another part of owning chickens. What I like to call “flock control”. We have roosters in our flock. Simeon Smith is our main rooster and he’s honestly one of the nicest roosters I’ve ever seen. He’s fairly gentle with the ladies and he has no problem beating the shit out of a rooster who isn’t nice to the ladies. But we have a lot of roosters, Simeon can’t be everywhere at once, and roosters become redundant.

The Triplets are a perfect example of redundant roosters. Three Sumatra / Cochin crosses that looked pretty much the same. 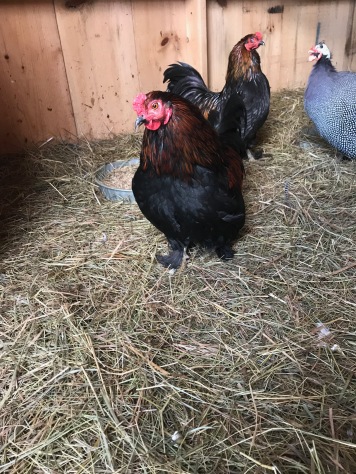 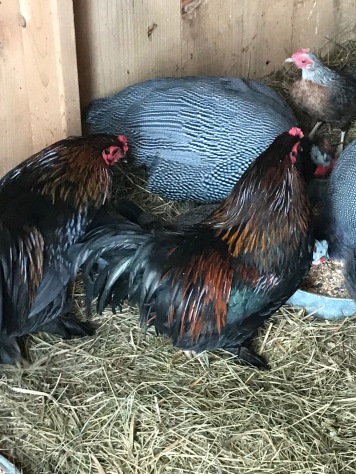 Our plan was to leave the roosters alone until they started showing aggressive behavior. Things were fairly quiet and then one of the triplets started attacking Old English hens. Breeding is a part of coop life if you have roosters and sometimes breeding can seem a little, let’s say unromantic. If the hen doesn’t seem distressed and the rooster gets through the breeding fairly fast I’ll leave them alone. But the OEs are about a third smaller than the full sized roosters and this guy only went after the OE hens. So he was put on the execution list. His brothers were quickly added to the same list (and met similar fates) when they started going after hens, one after another, during feeding time. I ended up grabbing the remaining two triplets and then watching the hens. It’s amazing how calm things are in a coop when you don’t have aggressive roosters fucking everything up. Needless to say they were dead that afternoon.

So there you have it – two of the brutal realities of chickening. Combine those with the fact that chickens are heartless killers and cannibals, and you might ask, “why bother having them at all?” 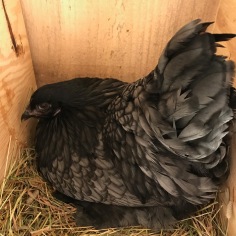 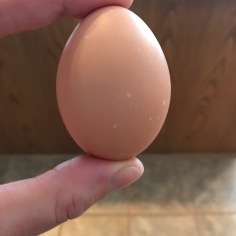 There’s nothing like fluffy little chicks, a mother and her babies, roosters crowing in the yard, keets calling from the trees, and farm fresh eggs. That they’re vicious little raptors is actually part of their charm, too.