We grew up on a farm where we ate a large portion of what we raised and grew. I don’t know that I appreciated it when I was a kid, but as an adult I am certainly grateful for the skills I learned in my youth. After watching how fast I could kill a chicken, my husband was also appreciative – and a little nervous.

One of our biggest goals for living in New Hampshire and starting a farm is self-sufficiency. Because we moved almost half-way through the year, we knew the first year would be a lot of trial runs, which meant starting small. A small garden with just a handful of different vegetables, hatching out a few more egg layers (ok, the laying flock didn’t stay quite as small as it should have), and raising a small number of meat chickens.

If you ever get the crazy urge to raise your own meat birds, the first thing you have to do is find a reputable hatchery. We bought Jumbo Cornish cross chicks from Cackle Hatchery. This chicken is a cross between a commercial Cornish chicken and a White Rock chicken. They’re produced as a commercial meat bird and grow so fast that their legs can actually give out because of their weight. They also tend to fall over and die from a heart attack if you let them grow past the recommended age (approximately 10 weeks).

About a week after you order, you’ll get an early morning call from the post office letting you know your chicks have arrived. You’ll walk in and you’ll be able to hear the pissed off peeping immediately. 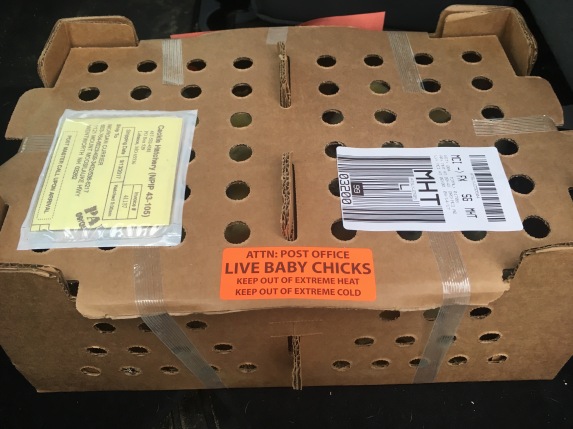 But there is something truly charming about looking into the holes of the cardboard box and seeing this: 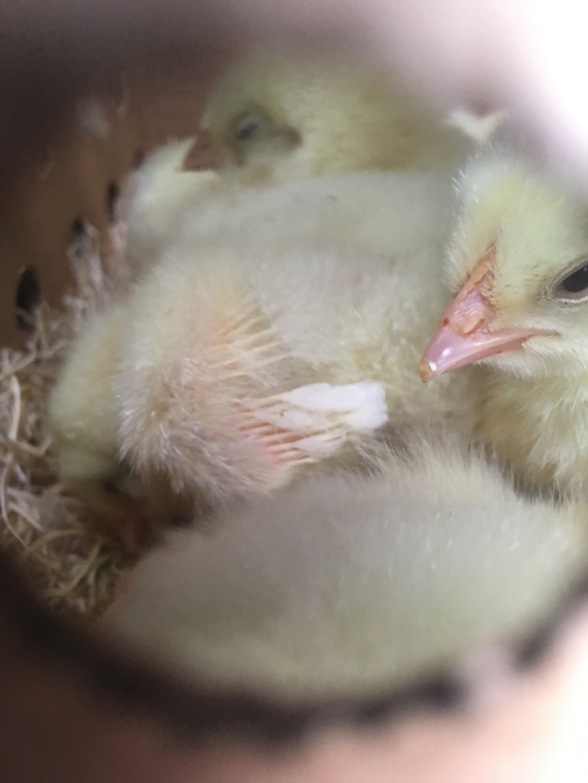 These guys were only a couple of days old but you can see that they were already getting wing feathers, something that doesn’t usually happen for about a week.

When you open the box don’t be surprised if one or two chicks didn’t make the journey. Cackle throws in a couple of extra just in case someone dies before arriving. We lost one but everyone else was quite healthy looking. 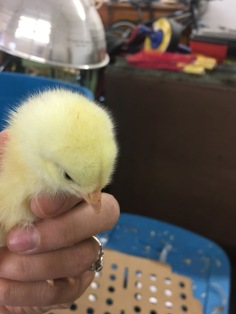 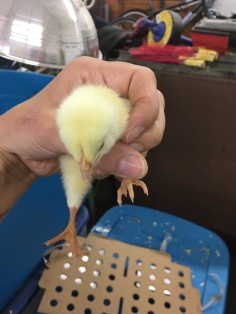 Aren’t they cute and fluffy? And yellow? And identical? If you’ve raised layers, you’ve probably noticed that even if you only have one breed of chicken, they have some individuality about them. A bit of color variety, feathers that lay just a bit different, and of course, lots of different personalities. That’s what makes them fun to watch. Meat chickens are not like layers. They eat, drink, and poop. And that’s it.

We moved the meat chicks into the coup at around two weeks. They were quickly outgrowing the brooders and they created so much poop so fast that the garage was starting to smell. 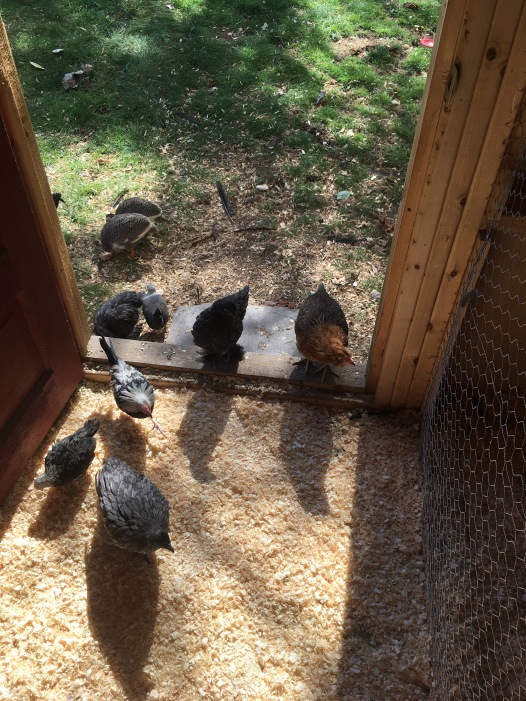 The layers were not impressed with their new roommates. At this stage in their lives, there isn’t a whole lot to say about them. They ate and kept getting bigger.

This is how they looked at about 25 days. Notice the legs on these suckers… 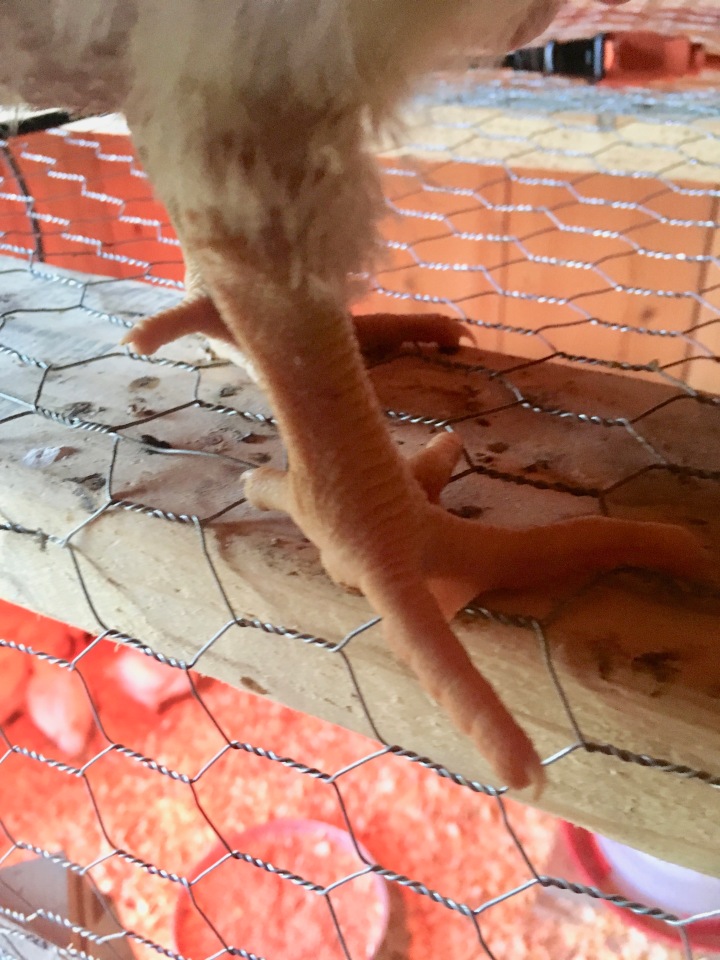 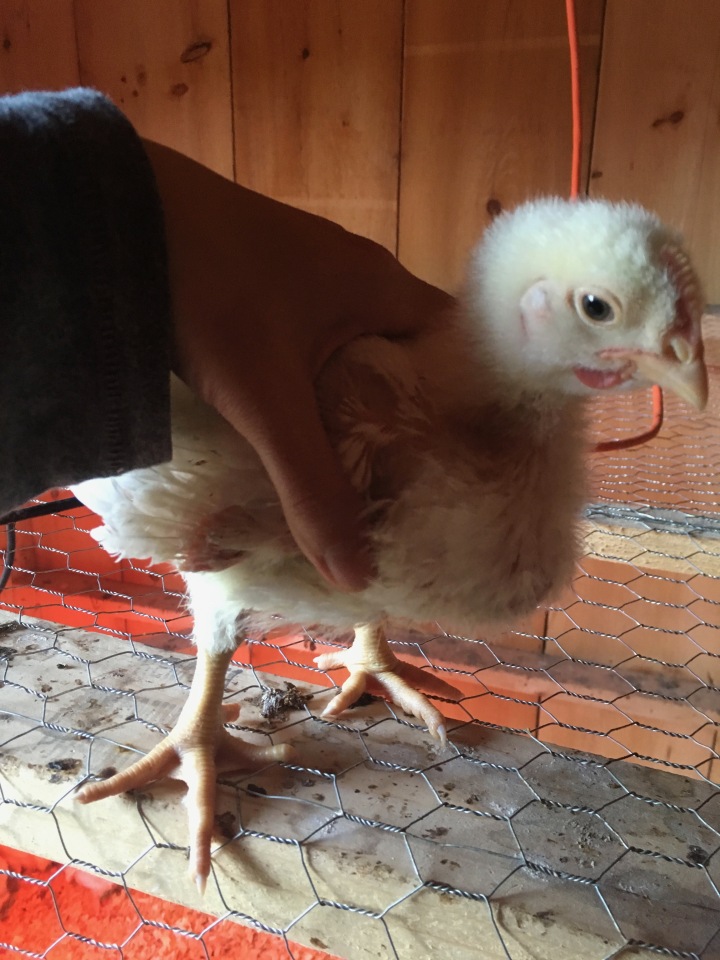 They were also already developing a much heavier breast.

This guy is a Sumatra Bantam Cochin cross (Tracy calls them Tillimatra’s because the Bantam Cochin hen’s name is Tilly). This chick is about a month older than the meat chicks but much smaller in body size. 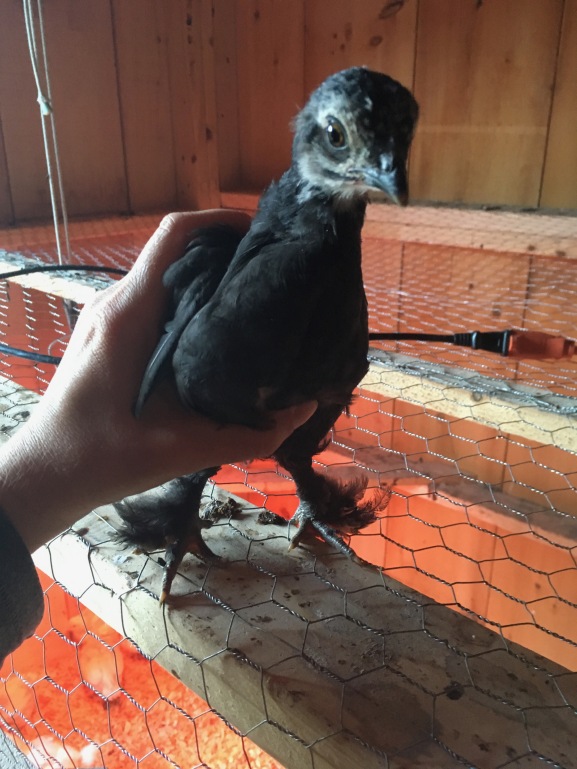 The next few weeks consisted of eating and popping. We finally felt they were big enough that they could hang out in the main coop with the layers.

You can see them in the back of the herd of chickens. It was one of the snowy days so nobody was particularly eager to go out, but the meats more or less spent all of their time inside. Eating and popping (are you noticing a trend here?…).

There are a lot of good reasons to raise meat birds. You know what your birds are eating, you know how they’re being treated, and there’s something quite satisfying in knowing you were able to grow something to feed you and your family. But there’s also a lot of reasons that raising meat birds is a huge pain in the ass. They’re filthy, they eat a ton of food, you have to clean them out about 10 times more often than layers, and they’re dumb as rocks. I watched one of the roosters try to jam his head through the chicken wire to get at the pan of food on the other side of the wire. All he had to do was move about two feet through the door (like the layers were doing), but nope – instead he kept bashing his head into the wire. Over and over and over again.

We butchered our meat birds just after 10 weeks and I have to say, even though it was cold, windy, and rainy as we did it, and our toes were frozen by the end, our backs ached from bending over, and the boys swore they were going to have dreams for weeks of plucking feathers, it was a very happy day. 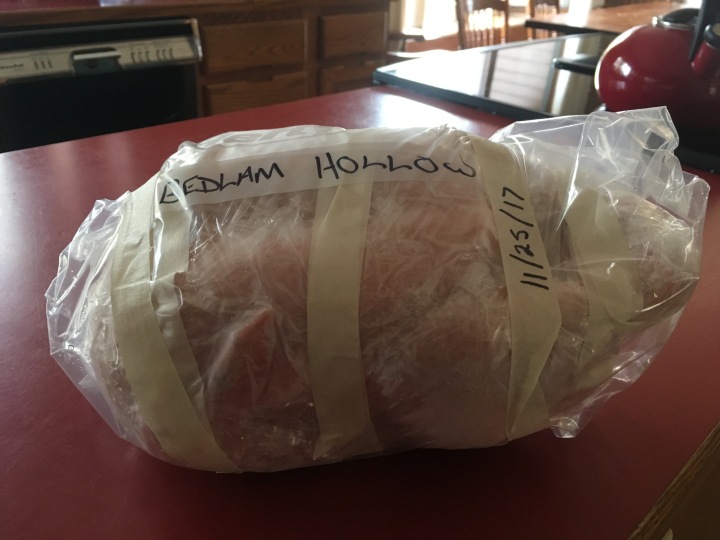 For a trial run, it was pretty successful. We have a list of things we’ll do different next year when we get a larger batch of meat birds. A different coop arrangement, an automatic plucker, and butchering during a warmer time of the year. But two things were confirmed. The layers are heartless little bastards – they hung around us the entire time to see what we were doing and steal feathers, and farm raised chickens are delicious.